< BACK TO INTERNSHIP STORIES 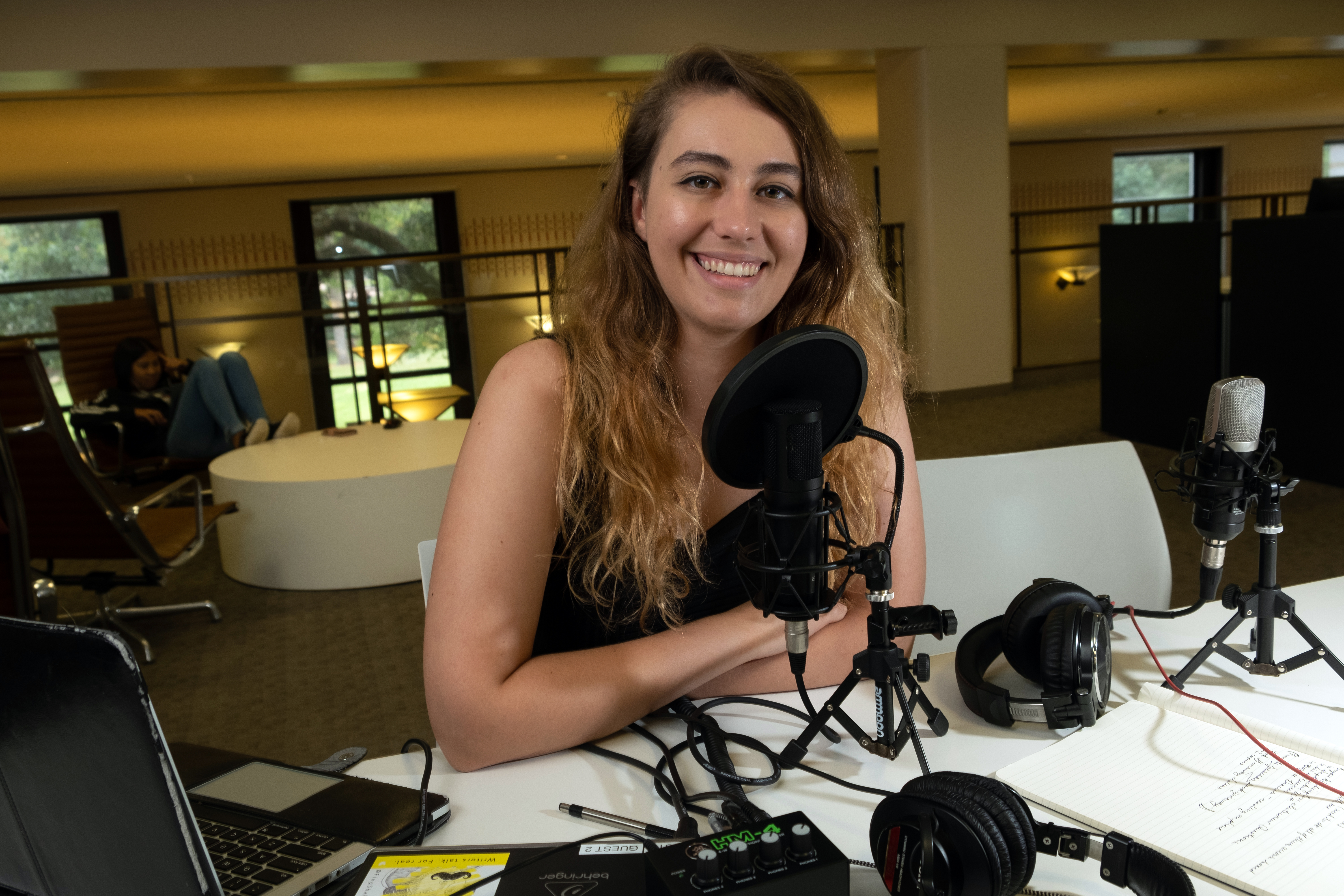 “I've been very flexible and open with my path. My process has been more like, what interests me at this given point in time, rather than climbing this very clear ladder.”

Lily Wulfemeyer’s passion for writing has taken the Brown College senior all over the map. From Shakespeare and Company’s Parisian bookstore to Tor/Forge publishing imprint in New York, Wulfemeyer has gained a wealth of experience and skill in just a few short years.

“I've been very flexible and open with my path. My process has been more like, what interests me at this given point in time, rather than climbing this very clear ladder.” Most recently, Wulfemeyer secured an internship at Bloomsday Literary, a local independent publishing press dedicated to amplifying marginalized voices of the Houston community.

While Wulfemeyer already had editorial experience, including as co-editor-in-chief of Rice’s literary journal R2 The Rice Review, podcasting was an utterly new skill. Co-hosting an interview with Eisner award-winning graphic novelist Tillie Walden on just day three of the job, Wulfemeyer played an active role in researching, recording and working in post-production for Bloomsday’s “F***ing Shakespeare” podcast, a series of interviews with poets, novelists, memoirists and short story writers.

“Lily was very willing to learn a new aspect of the business,” says Phuc Luu, chief creative officer at Bloomsday, noting that Wulfemeyer was willing to learn how to set up the equipment and how the technology works.

“We offered Lily studio time to develop, curate and record a show as a part of the internship,” says Bloomsday co-founder Kate Martin Williams. “That’s been in development for the extent of the internship and the idea is that by the time they leave, they’re ready to go, ready to record.”

In addition to honing editorial skills and building existing expertise in publishing and bookselling, Wulfemeyer took on an important role in social media marketing, expanding Bloomsday’s reach to new communities of readers, and drawing attention to literary voices that have yet to be heard. “I think it's necessary to see and hear these voices. They already exist, they're already incredibly strong,” Wulfemeyer says. “It's not giving a voice to the voiceless — that's kind of silly. It's just saying, listen to them because what they're doing is important, and if we want to care and listen to our public, this is our public as well.”

Wulfemeyer hopes to translate this professional dexterity and passion for creative work into a project that combats social injustice and champions marginalized voices in her community. “I have this super long-term goal of having my own bookstore that also functions as a community center. I want to walk out of [Bloomsday] having a better idea of how to get the books I want to see on shelves. Books I haven't seen and the books that the Houston community, you know the community I'm a part of, want to see.”

“I think our investment was 100 percent worth it and I hope Lily leaves with some new tools about different ways we can change the publishing industry,” says Williams, adding that Wulfemeyer “has that kind of attitude and enthusiasm, and because our industry in such flux right now, it’s receptive to those sorts of people.”

Profile written by Katelyn Landry, Editorial Assistant, Office of the Dean of Humanities