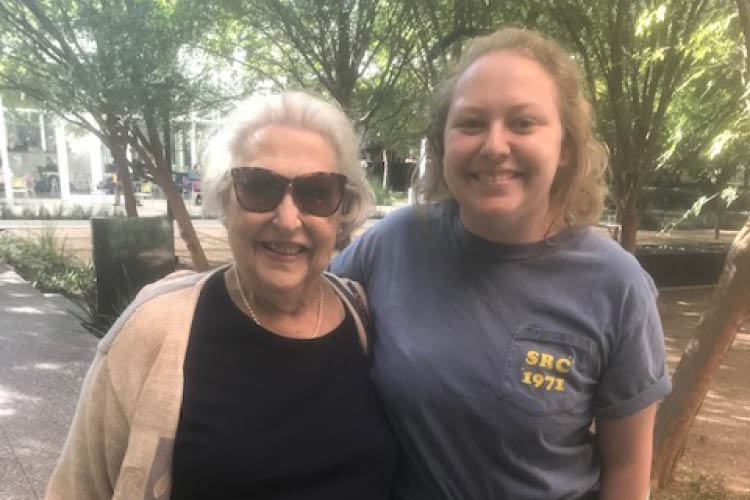 During her senior year at Rice, Katie Webber (Martel College ’19) was among the first group of students to intern in the Houston Jewish History Archive, a collection of historical materials related to and sourced from the Jewish communities in and around Houston. After graduating with a double major in Religion and Women, Gender and Sexuality Studies and minor in Jewish Studies, Webber was asked by Joshua Furman, curator and founder of the archive, to return as a part-time project archivist to resume the important work of curating the ever-expanding collection.

When she is not processing materials at the archive, Webber works at two local environmentally focused faith-based nonprofits. Though very different in terms of material work, both nonprofit and archival involvement involve an awareness and appreciation of interfaith relations, Webber says. In line with Furman’s mission to expand and enrich the body of resources on local Jewish culture, Webber stresses the importance of considering minority faith-based cultures which often disappear in hegemonic historical narratives.

The importance of preserving the history of the Houston Jewish community was highlighted after Hurricane Harvey devastated the city in 2017, flooding many synagogues, community centers and private homes. For Webber, experiencing Harvey was the turning point at which she considered herself a Houstonian, and working at the Houston Jewish History Archive has been an avenue for helping the community confront and rebuild from disaster.

“Preserving those things, especially in the face of knowing that a lot of it would otherwise be destroyed because of all these environmental concerns, is really important,” Webber says.

Webber has seen the impact of preserving Houston’s Jewish heritage firsthand while out in the community. In early 2020, Webber joined Furman at Congregation Beth Israel on the Jewish Day of Learning, Yom Limmud, where they hosted a booth for the archive and presented materials for visitors to observe. Webber recalls one woman brought to tears when — looking through yearbooks that Webber and Furman brought — she saw several photos of her family. The most popular item with the crowd was a large sign from recently shuttered Jewish grocery store Belden’s, a beloved fixture of Meyerland.

“Communities are constantly changing — what the institutions look like and what businesses look like — and for those communities to be able to see and connect with something that isn't there anymore, it’s obviously very important to them,” says Webber.

In addition to social and cultural significance within the Houston community, Webber sees the immense scholarly potential offered by the archive. Rice students can use materials for furthering their research, materials which are completely new to the body of historical resources on Southern Jewish culture.

“There are things in our collection that no one with a PhD has seen before,” says Webber. “The Houston Jewish History Archive gives students a great opportunity to work with materials no one’s ever worked with before and come to conclusions that no one has ever had before, and that’s important for the larger academic community.”

Webber herself has come across archival materials that have inspired her to potentially pursue research on gender relations in the orthodox Jewish community. She described photographs from the 1960’s and 70’s of men dressed as women in celebration of the Jewish holiday of Purim, which Webber described as similar to Halloween. She also explained that while men and women sit separately in orthodox synagogues today, there are photos in the archive taken as recently as the 1990s of co-ed seating. Situated at the nexus of Webber’s academic backgrounds in Jewish studies, women, gender and sexuality studies and general religion studies, Webber found these photos to be intriguing windows into the development of gender relations with a particular Southern lens that remains largely unexplored in Jewish scholarship.

Webber has plans to apply for graduate school where she hopes to study sociology of religion. Until then, she will continue assisting in the Houston Jewish History Archive’s steady progress in establishing a hub for the local community and academics alike who want to delve into Houston’s rich history.

Image: Katie Webber with Joyce Gilbert, former president of Houston Action for Soviet Jewry. Katie and Joshua Furman interviewed Joyce about her experiences visiting the former Soviet Union to assist refuseniks, Jews who had been denied permission to emigrate.