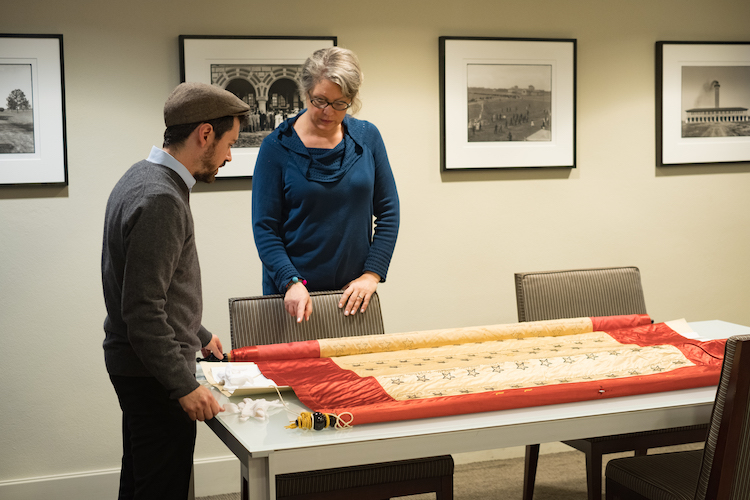 Both native Houstonians and members of the local Jewish community, Edith and Bernard Stolbun held deep interests in the histories of their community and family. Their grandson, Seth Stolbun, executive director of his family’s foundation, recalls his grandmother’s many family scrapbooks as a testament to their deep love for preserving history.

After reading about the Houston Jewish History Archive in the Jewish Herald Voice, a local newspaper, supporting it seemed a natural fit, given his family’s interest in preserving Houston and Texas history.

As a third-generation Houstonian himself, Stolbun was intrigued when Joshua Furman, founder and curator of the archive, told him about his work on a book about the Houston Jewish community, a subject that has not been typically explored in the body of Jewish history scholarship.

The Edith and Bernard Stolbun Family Foundation, founded in 2017, made its first gift to the archive when it needed it most — in the wake of Hurricane Harvey, as Furman was trying to save historical documents that were in danger of being lost forever. Since then, the foundation has made annual gifts in support of the archive, enabling Furman to hire additional student interns and workers to process the ever-growing volume of collections.

In addition to its financial support, the Stolbun family has contributed their own collections of historical artifacts to the archive, including a mini documentary about Edith and Bernard Stolbun that Seth helped produce. From old bar mitzvah invitations to school directories, Seth says the idea of his own childhood being preserved in the archive is very exciting.

“The beauty of an archive is there's no predisposition of deciding what's in or what's out and what will be relevant to someone in 20 or 100 or 200 years. Maybe they'll find my talent show video relevant for some reason or some club we started in high school or a video we made —that could all be kind of relevant to understanding early 2000s Houston Jewish young adult life,” he says.

As the archive progresses further, Stolbun says he is looking forward to see what other projects may blossom as a result, both within Rice’s Program in Jewish Studies and beyond.

“I think there are larger applications where, even though it's the Houston Jewish History Archive, it'll resonate with other places and other immigrants and other immigrant stories,” he says. “Although the archive is primarily focused on the Houston Jewish community, I think we should think about it in the larger context of Houston as a city of immigrants and the most diverse city in the country. It’s representative of a story of lots of other people as well. It can be useful for much larger research into immigration and things like that.”

For the future of the archive, Stolbun thinks the possibilities are boundless.

“I hope it is ultimately a very inclusive archive of a vast amount of material on southeast Texas and sort of the preeminent resource of primary documents and materials for anyone who wants to do research on the subject,” he says. “Part of the beauty of the archive is there is no predetermined outcome for what I hope besides those documents being as accessible for as many people as possible.”